Amazon has launched an internet-connected TV set-top box as it vies with Apple and Google to gain a share of the lucrative television market.

Dubbed Amazon Fire TV, the device is a small black box similar to Apple TV. It will cost $99 (£59) and is available immediately in the US.

It will allow consumers to stream content from Amazon’s library, as well other video-on-demand services, directly to their TVs.

The device can also be used for gaming. 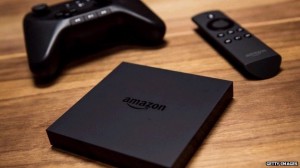 “People play games on tablets but they want to play on TV,” said Amazon’s David Larsen.

The firm has formed partnerships with gaming firms such as Sega, EA, Disney and “thousands of games” will be available next month. It is also setting up Amazon Games Studios to build bespoke games.

Users can buy a games controller, dubbed Voila, which looks very similar to an X-box controller.

The move puts Amazon in direct competition with Apple TV and Google’s Chromecast as all try to find a way into the living room.

The box comes with a Bluetooth-enabled remote, which means it does not have to be pointed at the TV to work.

Despite lots of content deals with the likes of Hulu and ESPN, there are some big content providers missing from the list including HBO, despite the makers promising an “open eco-system”.

Currently there are three main ways that consumers can stream video-on-demand services such as the BBC’s iPlayer and Netflix to their TVs:

Roku leads the field when it comes to net-connected set-top boxes. Meanwhile Apple has shipped an estimated 13 million of its set-top boxes and last year Google entered the fray with a $35 (£21) dongle that plugs into a television’s HDMI port and allows users to stream content from smartphones, tablets and computers.

“It’s like Dr Pepper challenging Coke and Pepsi’s empire. Apple’s there already, Google joined last year, now all will be up against the incumbent pay TV providers.

“To thrive, however, they’ll probably have to do partnership deals as Apple has been trying.”

Amazon has a lot of its own content to put on such a device though.

“It makes sense for Amazon to try to tie everything in to its eco-system and is the logical next step after the success it has had with the Kindle,” said Ovum analyst Jonathan Doran.

Recent research from research firm Consumer Intelligence Research Partners (CIRP) revealed that Kindle owners spent, on average, $443 (£266) a year more than the Amazon shopper who does not own a Kindle.

Now Amazon is looking to do the same with video.

In 2011 Amazon released its Instant Video service, and it has invested huge amounts to create a large catalogue of movies and TV shows. The service is offered to Amazon Prime customers for free instant streaming.

Amazon Prime currently has more than 10 million users worldwide, with the bulk in the US, according to the Strategy Analytics consultancy.

Last month the firm put up the price of Prime from $79 to $99 per year. Subscribers can rent a Kindle e-book each month, access its video library and obtain free one-day shipping on items sold via the Amazon website.

Although it makes sense for companies to gain a share of the on-demand video market it is not always good news for consumers, according to Mr Doran.

“There can be too many things to choose from and I have yet to see one device where you can do everything,” he said.

“People have to keep chopping and changing between devices to get different content.”

“Over a quarter of online video viewing is happening on a mobile or tablet, that platform has become mandatory for content publishers,” he said.

“All of the technology companies are building infrastructure to connect to the new economy forming around television so that people can watch what they want, when they want in a seamless way.”