As soon as Altaf Hussain said, if Urdu-Speaking Sindhis are not liked by the rulers then they should be given a separate province, all the scattered politicians united condemning the demand of Altaf 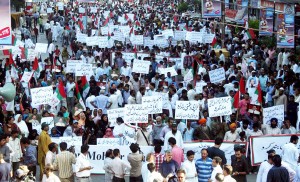 Hussain yet no one showed any courage and guts to talk about unjust and prejudiced system that Altaf Hussain blamed as the reason of the victimization of Urdu-Speaking Sindhis since 1974.

Almost every politician spoke against a separate province for Urdu-Speaking Sindhis but no one of them are interested to dispose the most discriminative Quota System implemented since 1974 through which the Urdu-Speaking Sindhis are treated as the second class citizens of Pakistan. All the frontline leaders of Pakistan Peoples Party (PPP) including newborn Chairman, Bilawal Zardari, who twitted a famous verse of Sindhi nationalist poet Shaikh Ayaz, ‘mersoon mersooon sind na desoon’ meaning ‘we will die but never give Sind’, aggressively, condemned Altaf Hussain’s demands.

Neither Altaf Hussain’s demands are new nor is the criticism of so-called loyalists of Sind. Bilawal Zardari, perhaps doesn’t know that the founder of this division of Urdu and Sindhi Speaking was his own grandfather (from mother-side) and his political affiliates. As you sow so shall you reap, so let’s face the music. As I wrote before in my many past articles; the seed of division in Sind was first planted by the government of Zulfiqar Ali Bhutto in 1974 by the introduction of ‘Quota System’ dividing Sind as Rural and Urban, on the name of providing more opportunities and facilities to the underprivileged people of Sindh Rural. In ground reality, this was the division of Sind separating Urdu Speaking and Sindhi Speaking people. Quota System was introduced in order to maintain their vote bank in interior Sindh. In Sindh, Pakistan Peoples Party (PPP) has been led by the powerful feudal. From the very beginning leaders of PPP introduced the party in Sindh as the party of Sindhi-Speaking in order to secure their vote bank in rural areas. The people of Karachi, Hyderabad and Sukkar were treated as De Facto. Even those Urdu-Speaking who were born in Sind were called as ‘Manah-Ghir’ – Asylum-seekers. Bigger Quota allocated in government jobs and high & professional colleges to the Sind Rural and lesser to Sind Urban on the name of uplifting the conditions of the people of Rural areas. Consequently hatred and division between Sindhi-Speaking and Urdu-Speaking created. Continuous discrimination in jobs and higher professional educational institutes led the young Urdu-Speaking even who were born in Sindh as Muhajir. Past’s ‘All Pakistan Muhajir Students Federation’ then ‘Muhajir Quomi Movement’ and today’s Mutehada Quomi Movement is the product of this division and deprivations on the name of struggle against their rights. Due to this constant prejudiced system in Sind repulsion among the young Urdu-Speaking of Urban areas progressed.

Today, this is the ground reality that in Sind, there are two major ethnic communities Sindhi-Speaking and Urdu-Speaking and they cannot be contained together until a fair and just system is implemented alternatively, sooner or later, Urdu-Speaking Sindhis will demand for a separate Province and further denial to their demand will lead to the demand of a separate state. The denial of the rights of the people create rebellion minds and continuous ignorance to them lead to the total breakup.

When the genuine demands of Shaikh Mujeeb-ur-Rehman for Bengalis (people of then East Pakistan) were neglected, he stood-up for a separate country and eventually Pakistan lost its half part. And if we look further back the reason of the creation of Pakistan, we find that it was in result of the continuous denial of the rights of the Indian Muslims by the rulers. The Founder of Pakistan, Mohammed Ali Jinnah never demanded for a separate country in the first place, when the genuine demands were continuously ignored despite of many proposals, Muslim League eventually demanded for a separate country, many Hindu nationalists at that time challenged that it would never happen in their life-time but they failed and Pakistan was created, had they listened to the genuine demands of Muslim League partition never occurred.

We all understand that unjust and unfair means of running a state build by corrupt and incompetent administration and this, what has been happening in Sind for the last 40 years. There is unbelievable corruption in Sind government which is the result of unjust and unfair system. At least 50 percent population of Sind is the Urdu-Speaking Sindhis, how come there hasn’t ever been an Urdu-Speaking Chief Minister of Sind. More than 90 percent jobs in Police, Judiciary, Income Tax, Custom, local governments are given to Sindhi-Speaking Sindhis; so how come any one can expect people will remain silent.

Altaf Hussain’s mistake was that he diverted from his original demands for which the Urdu-Speaking people supported him. One good thing in his yesterday’s speech was that he did not use the word, ‘Muhajirs’ for Urdu-Speaking Sindhis. No more Urdu-Speaking people in Sind are Muhajir (migrated) now, they all are son of the soil now and possess equal rights. Therefore, it would be wise thinking and would be better for them to acknowledge the ground realities. The Urdu-Speaking Sindhis now have no choice except to fight for their rights, and in today’s situation, no one will not deny the fact that if Altaf Hussain orders them to stand-up against the government they will.

Altaf Hussain must understand now that he should not use the slogan of separate province to pressurize the government for any political benefits of MQM, otherwise, the demands of the separate province will rise from any other platform and Urdu-speaking Sindhis will follow them. However, the other option for the present rulers and MQM is to sit down and work together to demolish Quota System and all discriminative and prejudiced laws and practices and launch a fair and a just system which will treat everyone in Sind equally. Every citizen of Sind should be treated on merit in every department.