A Russian aid convoy, which has escalated further tensions between the West and Russia, has returned from rebel-held eastern Ukraine to Russian territory, observers of OSCE, the Vienna-based rights and security organization, have said. 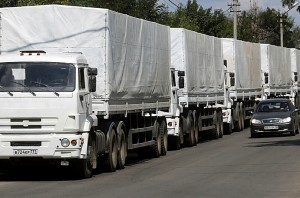 A storm of anger was expressed by Western capitals after the convoy entered Ukraine on Friday without the permission of the Ukraine government in a move Kiev called “invasion”.

The development comes as German Chancellor Angela Merkel arrived in Kiev to push for a ceasefire between pro-Russia fighters and Ukraine.

The return of the convoy “is complete”, the acting head of the OSCE mission observing the Russian border crossing close to Donetsk, Paul Picard, told AFP news agency.

“We have counted 220 vehicles returning today” plus the seven support vehicles that returned on Friday, said Picard.

The OSCE said that only 227 vehicles had crossed the border, while Russian authorities had previously said the convoy consisted of around 280 lorries.

“According to our information as of 1pm (10:00GMT), the departure from the territory of Ukraine by 184 Russian vehicles
has been confirmed,” he told Reuters news agency.

Kiev had expressed repeated fears that Russia may be using the vehicles to smuggle in weapons to pro-Kremlin rebels, a charge denied by Russia.

US President Barack Obama and Merkel had warned following a telephone call on Saturday that the Russian decision to send in the convoy marked a “dangerous escalation” of the four months of conflict in Ukraine.

Russia says the convoy that entered Ukraine on Friday is for humanitarian purposes, but Ukraine, the US and other Western powers say the Russians failed to abide by conditions set by Ukraine and the International Red Cross (IRC).

However, Valentyn Nalivaychenko, Ukraine’s state security chief, said: “We consider this a direct invasion by Russia of Ukraine.”

Merkel will hold talks with President Petro Poroshenko on Saturday, three days ahead of the first meeting in months between Poroshenko and Russian leader Vladimir Putin in Minsk alongside top EU officials.

Merkel recently said that the main goal of her planned trip to Ukraine was to help secure a ceasefire, reiterating that there could be no military solution to the crisis.

The Ukrainian president has pledged to “talk peace” with Russia, but insists that an end to the conflict that has cost more than 2,200 lives can be achieved only if pro-Kremlin fighters are pulled out of Ukrainian territory.