FATULLAH: Umar Akmal’s dashing century enables Pakistan to set a sizeable target of 249 for Afghanistan in the third match of the Asia Cup 2014 here at the Khan Shaheb Osman Ali Stadium on Thursday. 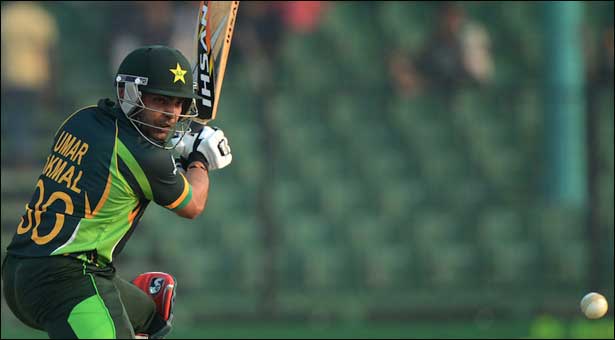 After being sent into bat by Afghanistan captain Mohammad Nabi, Pakistan openers Ahmed Shehzad and Sharjeel Khan provided a good start of 55.

Shehzad made 50 off 74 balls with seven fours and Sharjeel scored 25 off 37 balls with two boundaries and a six.

However, as soon Sharjeel was dismissed, the top order batting collapsed and Pakistan were reeling at 117 for six in the 30th over.

Then Umar Akmal and Anwar Ali came to rescue and added 60 runs for the seventh wicket partnership.

After Anwar made an exit, scoring 21 valuable runs, Akmal found another good partner in Umar Gul to take Pakistan past 200. Both Umars added 40 runs for the eighth wicket.

Later, Akmal took the charge to add 31 runs in just two overs to steer Pakistan to 248-8 in the fifty overs.

He remained not out on 102, smashing seven fours and three sixes during his 89-ball innings. This was his second hundred in One-day International career.

Afghan boys who were playing for the first time in the Asia Cup, peformed very well in the field with an accurate bowling and alert fielding.

Pakistan were playing their second match in the tournament after losing the opening match by 12 runs against Sri Lanka on Wednesday.

They made one change in the team, bringing in Anwar Ali in place of Bilawal Bhatti.