Pakistan off-spinner suspended from bowling by the ICC after action deemed illegal; PCB may appeal decision.

Banned Pakistani off-spinner Saeed Ajmal has vowed to correct his illegal bowling action and return to cricket before next year’s World Cup in Australia and New Zealand. 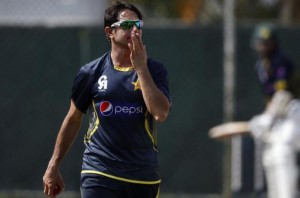 The International Cricket Council (ICC) banned the 36-year-old earlier on Tuesday after bio mechanic tests revealed all his deliveries breached the permissible limit for straightening of the elbow joint.

“The ban is not a problem for me right now,” Ajmal said. “The ICC has stopped me from bowling because my elbow is bending beyond the 15 degrees allowed by the ICC and I know I can correct that.

“It is very disappointing to know the results of the tests but I am a fighter and I know what I have to do to get back into international cricket before the World Cup.”

Ajmal, who turns 37 next month, said he was open to approaching former players to help him correct his action which was first reported in 2009.

“Playing in the World Cup and doing well for Pakistan is a dream for me and I am not going to give up on that.”

Ajmal has about five months to correct his action and appeal for a reassessment in order to play in the World Cup.

Pakistan Cricket Board (PCB) Chairman Shaharyar Khan conceded it was a big jolt coming less than six months before next year’s 50-over marquee event. He added that the PCB is considering all options before deciding their move.

“The PCB has referred the matter to its recently-formed Illegal Bowling Action Committee, which will consider the matter and revert with their views and/or recommendations and the Board shall thereafter decide what action to take,” Khan said.

Starting next month, Pakistan play one Twenty20 International, three ODIs and two tests against Australia in the UAE.