This is the third time I am writing a tribute for a departed friend. The first time it was the death of an icon – Mr Justice 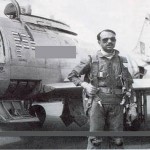 The second time it was the death of my dear friend Major General M. Imtiaz Ali, Defence Advisor (Minister) in the first cabinet of Benazir Bhutto, who is an unsung hero who very few people know as the real father of the missile programme of Pakistan. But he also played an important role as Military Secretary to Prime Minister Bhutto in doing the right thing in the face of diverse political pressures. Most of what he did will for ever remain outside public gaze but there is one thing of importance that I will reveal now as it concerns Air Commodore M.M.Alam who died on 17 March 2013. Alam was my course mate (6TH JSPCTS) and a life long friend. He is more than an icon; he became a legend in his life time – a symbol of fearless valour. He shot down five Indian aircraft in one sortie – in less than a minute – a world record. If I remember correctly the total number of Indian aircraft he shot down during the 1965 Indo-Pakistan War was fourteen (14).

Air Commodore M.M.Alam hailed fromEast Pakistan. His family migrated fromWest Bengalin 1947. He would often tell his friends that when travelling fromCalcuttatoDhaka, young boys took great pride in overwriting the names of cities on milestones in Urdu. It was taken for granted, he would tell, that Urdu would be the common language of both East andWest Pakistan. But then politics came in the way. It was considered ‘prudent’ by Bengali politicians most of who spoke Urdu at home and could not read or write Bengali, to demand that Bengali be a ‘state language’. He was one Bengali who was Pakistani first and was completely at home inWest Pakistanamong brother officers. He always stressed that it was the need of Bengali Muslims more than West Pakistanis to be accepted as a part of the mainstream. He has since been proved right. Separated from West PakistanBangladeshis being Hinduised and is in danger of becoming absorbed byIndia.

Recognising the foreign enemy is an essential part of crystallising national personality. Some times, recognising the internal enemy is even more important in order to preclude subversion. InEast Pakistan, the Hindu minority were the obvious potential fifth column but because of the practice of caste apartheid by them its role was confined and limited. But inWest Pakistanthat minority was the Qadiani community which had supported the PPP led by Mr Bhutto in 1971 Elections. Upon assumption of office Prime Minister Bhutto had appointed a Qadiani as the Naval and Air Force Chief. General Tikka was the Army Chief but the next senior most General in the Army was a Qadiani. I remember that we often used to joke that the country was “one heartbeat away” from being taken over by the Qadianis. M.M.Alam had a direct and personal experience of what that meant. There was an attempted coup d’état by middle rank officers against Bhutto Administration in 1972. Air Marshal Zafar Chaudhry, the Air Force Chief at the time, felt so threatened by the widely revered, popular and outspoken M.M.Alam that he included his name among those involved in the ‘Rawalpindi Conspiracy Case’. Alam was arrested and put behind bars in an Air Force cell. There was an outcry in disbelief and Alam had to be released.

I had met M.M.Alam again inAnkara(Turkey) where I was the Principal Staff Officer to General Akhtar Malik in CENTO and he was commanding the first Mirage Squadron which was being ferried fromFrancetoPakistanviaTurkey. I had remained in touch with Alam ever since. When he got on the wrong side of the Air Chief he came to see me at my house in Gulistan Colony inRawalpindi. I went with him to General Imtiaz who was then MS to the Prime Minister. He listened attentively to Alam, asked us to wait in his office and went to see the Prime Minister. He came back after several minutes and asked who would be a good Chief of the Air Force. Alam named Air Commodore Zulfikar who was the senior most but was on leave pending retirement, (LPR). We left not knowing what might be the decision. The next day the news was splashed all over that the Air Marshal Zafar Chaudhry had been relieved and Air Marshal Zulfikar promoted and appointed Air Chief. Clearly, General Imtiaz had tied all the loose ends.

There were four witnesses of that event. Prime Minister Bhutto, General Imtiaz and Air Commodore Alam are all dead. I am the only one alive. If I do not tell the story the truth would never become known. I have to tell this story because M.M.Alam was much more than just ‘brave’. He was a true Mujahid who stood up against the internal as well as the external enemy. He never married and his legacy is not children or property. In his later years he was a true Muallim, who never tired of speaking what others are afraid to speak about. Sheikh Mujib was a traitor who was an enemy collaborator as bad as Mir Jaffer of Bengal and Sadiq of Deccan. We secured our freedom from British rule because we called Mir Jaffer and Sadiq as traitors. Bangladesh would get deeper into the clutches of India if its people did not put Sheikh Mujib alongside Mir Jaffer and Sadiq. More important, if Sheikh Mujib continues to be celebrated as a hero and liberator, there will be more of them – in Baluchistan, Sindh and elsewhere in Pakistan.