If you work in agriculture, forestry and fishing, then you’re working in Australia’s most dangerous industry, a study has found.

With 44 fatalities and 3510 serious injuries in 2016 alone, agriculture, forestry and fishing the most hazardous industry for the third year in a row, according to a recent analysis by Finder Insights. The most common cause of injury being sheep, beef cattle and grain farming.

“Although other industries may have more of a reputation, agriculture, forestry and fishing saw the highest proportion of fatalities and compensation claims in 2016, for the third year running,” Finder Insights Manager Graham Cooke said.

The analysis of the latest SafeWork Australia data found the second riskiest jobs were in transport, postal and warehousing followed by construction in third place.

Meanwhile, the country’s safest jobs are found in the financial and insurance services, with only 620 serious injuries and no fatalities in 2016. 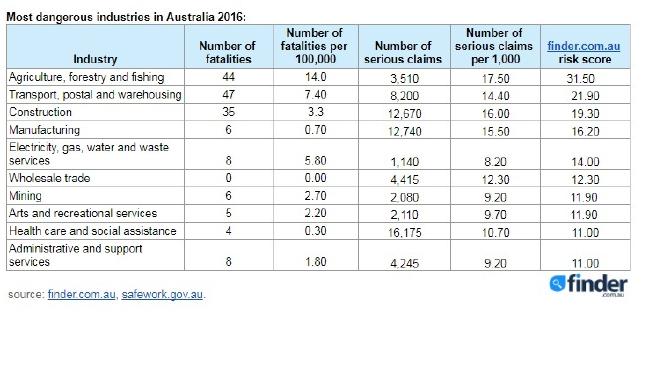