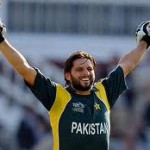 Pakistan bowlers restricted India to 245 for eight in the fifty overs in the sixth match of the 12th Asia Cup here at the Shere Bangla National Stadium on Sunday.

Sent into bat by Pakistan captain Misbah-ul-Haq, India could not accelerate the run rate due to accurate bowling by Pakistan spinners and pace bowlers despite three individual

Ambati Rayudu scored 58, Rohit Sharma made 52 and Ravindra Jadeja remained not out on 52.

Only three more batsmen – Ajinkya Rahane (23), Dinesh Karthik (23) and Shikhar Dhawan (10) – could get into the double figure.

Pakistan made one change giving international cap to fast bowler Mohammad Talha in place of Anwar Ali while India also made one change as leg-spinner Amit Mishra replaced Stuart Binny.

Pakistan and India, both have played two matches each so far in the tournament, winning one and losing one.