At least 14 people, mostly civilians, have been killed in US air strikes in Afghanistan, officials have said, sparking condemnation from Preside 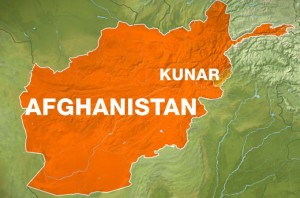 nt Hamid Karzai who has often criticised the conduct of the NATO forces.

Abdul Ghani Musamem, a spokesman for the governor of Kunar province, said 14 people died in the air strike in Narang district on Tuesday while 13 others were wounded.

Civilian casualties caused by the US-led military coalition during the war against the Taliban have been one of the most contentious issues in the 13-year combat campaign that will end by December.

“As a result of a US aerial bombardment 11 civilians, including two children and two women, were killed, and 12 more injured,” said a statement from the presidential palace on Wednesday.

NATO’s International Security Assistance Force (ISAF) made no immediate comment on Tuesday’s air strike, but it often stresses that avoiding civilian casualties is a major priority during operations.

Abdul Hadi Sayedkhil, the police chief of Kunar, told AFP news agency that a joint Afghan-NATO patrol in the province, which is one of the most volatile areas of the country, was ambushed by rebels.

“The foreign forces called for air support and as a result of bombardment a number of militants and civilians were killed. We are investigating the incident,” he said.

Saleh Mohammad, a survivor being treated in hospital in the provincial capital Asadabad, said there had been two waves of bombings.

“Four of our villagers were on their way back home from work when airplanes bombed them,” he told AFP.

“When people went to the area to collect their bodies or take the wounded people to hospital, we were bombed again. Dozens of people, including women and children were killed, or wounded.”

Aimal Faizi, a spokesman for Karzai, said on Twitter the president “strongly condemns a US airstrike that killed & injured civilians including women & a child” in Kunar province.

Major Paul Green berg, a spokesman for the NATO-led coalition, said a precision strike killed one fighter in nearby Dangam district.

It is often difficult to confirm the toll from air strikes and other attacks in rural Afghanistan.

Allegations of civilian deaths are a frequent cause of friction between Karzai and NATO.