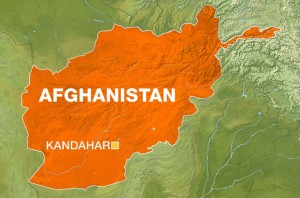 A roadside bomb has killed 15 civilians travelling in a pick-up truck in a volatile district of southern Afghanistan, officials said, in the first major incident since elections two days ago.

“A civilian vehicle hit a roadside bomb on the outskirts of Maiwand district,” Ghorzang Afridi, Kandahar provincial police spokesman told the AFP news agency. “As a result of the blast, 13 civilians were killed, all men.”

The blast came after a relatively calm weekend in which no major attacks were reported as Afghans voted for a new president and provincial councils.

The Taliban had threatened violence to disrupt Saturday’s elections, and staged a series of high-profile assaults in the preceding weeks. But security forces tightened their grip and only sporadic attacks took place, according to the Associated Press news agency.

Citing a local government spokesman, AP said the two pick-up trucks carrying the civilians hit the hidden explosives on a side road that was being used because authorities blocked the main road following a suicide bombing targeting a NATO convoy in Kandahar province.

Those killed included a woman, and four other people were severely wounded and in critical condition, according to Dawkhan Menapal, the spokesman for the provincial governor.

All the passengers were from Uruzgan province to the north of Kandahar and were apparently travelling home when the blast occurred in the Maywand district.

The Taliban claimed responsibility for the earlier attack on Monday, AP reported, but blamed international forces for the roadside bombing, saying the foreign forces were trying to hurt the reputation of the armed group by making it look like the Taliban were killing civilians.

The suicide bomber was in a minivan when he detonated his explosives in front of the NATO convoy in the same district.

Menapal says no serious casualties have been reported in that attack. The international alliance said it was aware of an incident in Kandahar but has not provided any details.