Afghan presidential candidate Abdullah has pulled his observers from an audit of the country’s disputed election over concerns of vote fraud, his spokesman has said. 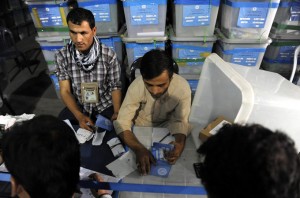 Fazel Sancharaki said on Wednesday that the process was “full of fraud”.

Abdullah has accused auditors of refusing to throw out fraudulent ballot papers and demanded an independent investigation.

The process followed allegations of vote fraud on both sides and is meant to decide whether Abdullah Abdullah, a former foreign minister, or former Finance Minister Ashraf Ghani Ahmadzai will replace President Hamid Karzai.

Liam McDowall, a spokesman for the United Nations in Kabul, confirmed that there had been a “temporary pause” in the audit process but said monitors did not anticipate it would be a significant disruption.

Reporter, reporting from Kabul, said that the vote auditors have asked Ghani’s supporters to leave as well.

“The real question is whether Abdullah Abdullah and his supporters will accept the results of this audit without their representatives in the room. It was Abdullah Abdullah though who called the international community and the UN to oversee this audit,” she said.

“The UN observers say they are optimistic the process will continue apace. It might even go more quickly without Abdullah’s representatives in the room. The auditors have gone through 74 percent of the ballot boxes but the last few thousands are the most contentious.”

Abdullah’s decision to pull observers from the process throws what has already been a lengthy and contentious process into further turmoil.

Under a US-brokered plan, all the eight million ballots from the country’s June presidential runoff are being audited for fraud.

But Abdullah’s camp says they have concerns about fraud that are not being addressed in the audit.

“The biggest challenge for us in Afghanistan is this process is becoming a very, very long process, which is impacting not only the political process but also the Afghan economy,” Haroun Mir, a political analyst base in Kabul, told media.

“The coffers of the Afghan government are empty. The Taliban have been attacking in 16 provinces, so the security situation has been deteriorating day by day and we have to find a solution as quickly as possible.”