Former foreign minister says he is the winner of the poll and that nobody who “committed fraud” should take power.

Afghan politician Abdullah Abdullah has rejected the results of June’s presidential run-off, calling the vote that put his arch-rival Ashraf Ghani ahead “rigged”. 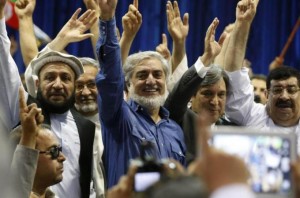 Speaking on Tuesday to a crowded gathering, known as a  Loya Jirga, in Kabul, Abdullah told his followers that the results of the vote were fabricated and that he had won both rounds of voting.

“I am refusing to accept the result, I condemn it and I will not accept it,” Abdullah said.

“Nobody who has committed fraud should dream they will make their way to the presidential palace,” he added.

Ghani, meanwhile, said that “political discussions” were needed in order to ensure the results were accepted by all.

Abdullah told his thousands of supporters he was the winner of the run-off, putting himself on a collision course with Ghani.

“We are the winner of this round of elections without any doubt,” he told a roaring crowd in central Kabul.

The veteran politician, who was Afghanistan’s former foreign minister, said the Afghan people were waiting for him to announce a government and “defend their votes”, but stopped short of declaring his own government.

Abdullah’s refusal to accept the result threatens to spark a political crisis in a country already destabilised by a conflict with Taliban fighters.

Earlier on Tuesday, US Secretary of State John Kerry said that any attempt to take power illegally would cost Afghanistan US support.

“I have noted reports of protests in Afghanistan and of suggestions of a ‘parallel government’ with the gravest concern,” he said in a statement issued by the US embassy in Kabul.

“Any action to take power by extra-legal means will cost Afghanistan the financial and security support of the United States and the international community.”

Security has been deteriorating in Afghanistan as most ISAF forces prepare to leave the country after 12 years of war against the Taliban.

Abdullah’s comments came shortly after at least four NATO soldiers, two policemen and 10 civilians were killed in a suicide blast in eastern Afghanistan.

“These kinds of attacks are very, very worrying especially at this very politically delicate time with the presidential election results very much in doubt,” our correspondent said.

Security sources told Al Jazeera that women and children were among the dead and at least 14 people were also injured in the attack on a medical clinic in the province of Parwan near the Bagram airbase.

The Taliban claimed responsibility in a text message to the Reuters news agency.