TONY Abbott has revealed a secret and unlikely admiration for the world’s most powerful leader, describing Barack Obama as an “extraordinarily gifted man” and a potential friend to rival past ­presidents. 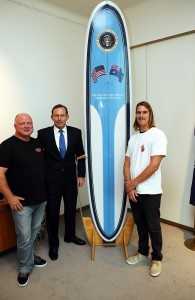 But as the PM headed into his first official talks with the US President in Washington today, he pulled no punches in saying he would aggressively push for a historic strengthening of US-Australian relations.

In an exclusive interview with The Daily Telegraph ahead of his first White House meeting, Mr Abbott said he would seek a commitment from the US that its military and strategic rebalance to our region and Asia would be a real and lasting one.

He will also call on the President for to deepen security and intelligence co-­operation within the so-called “five eyes” agreement — the most powerful intelligence network in the world, involving the US, Australia, the UK, Canada and New Zealand — in the wake of the Snowden intelligence leaks.

And the PM will also push for a broadening of the free trade agreement with the US first negotiated by his conservative predecessor John Howard.

“We want stronger US ­engagement in South-East Asia. It is very important … the five eyes intelligence arrangements are very important,” Mr Abbott said.

“And while we are pleased with the US free trade agreement, that is not to say we could not get better access to US markets for some of our Australian agricultural products.

“It has always been critical that Australia has had a security partner of great power.

It was once Great Britain … subsequently it was America but it has always been absolutely critical for our existence as a nation to have a security partner.”

But on a personal level, the PM has also revealed a surprising affection for his political polar opposite, claiming his hope was that they would depart good friends after their meeting tomorrow. “When I met President Obama briefly in 2011, he impressed me as an extremely charismatic and likeable individual,” Mr ­Abbott said.

“He is a man of extraordinary personal gifts. I certainly expect to like him at least as much this time as last time, considering the different position that I am in now.”

The PM admitted he regretted his remarks last year in which he described Mr Obama as leading the most left wing US administration in 50 years.

“One of the things I have learnt is not to be a commentator and that was perhaps a lapse into commentating and hopefully it won’t happen again,” he said.

“Regardless of the politics and the personalities of the people at the top … this is a strong and even intimate relationship, but it can be even stronger if there is some ­element of personal rapport as well … this in the end is what I would like to achieve.”

While critics of Mr Abbott have attempted to scuttle the meeting with suggestions of an expected frosty reception, senior government sources confirmed that the White House assured the PM’s office Mr Abbott would be warmly received.

US officials have revealed to The Daily Telegraph the 52-year-old President was hoping for a “good outcome” from his meeting with his 56-year-old counterpart.

“They will hit it off … they are both straight shooters, both physically fit men … Abbott is a complex character and we take him seriously. But Obama is also a complex character. We expect they will get on well,” one US official said. Mr Abbott also revealed for the first time since becoming Prime Minister that he and President Obama had exchanged several secret phone calls.

“He was good enough to call me a few days after the election … and we have had a couple of significant conversations since,” the PM said.

“One in particular was quite lengthy about a very important subject.”

While the PM would not divulge the nature of the conversation, US officials suggested it would have likely been related to the Snowden leaks, which thrust Mr Abbott into a diplomatic crisis with Indonesia in the first weeks of his leadership.

US officials also suggested that the clash over climate change may not even be raised during the one-hour meeting, suggesting that Mr Obama was not looking for conflict with an Australian leader at their first meeting,

“It is my expectation that he will discover an Australian government that is there for him when he needs us and with which he can be entirely candid,’ Mr Abbott said.

A Sydney-made board, in the colours of Obama’s Air Force One plane and bearing the Presidential seal, will be Mr Abbott’s official gift.

Bennett Surfboards’ Brookvale factory manager, Greg Bennett, said he thought it was a hoax when the PM’s office called about making a custom-made long board for the President — in a week.

It was a similar story for the Prime Minister’s office, which had to call the White House in advance to get approval to use the Presidential seal before the design was finished.

Mr Bennett is no stranger to high-pressure orders. He was commissioned by Manly Council to build a board for Prince George in April.

Former PM Julia Gillard’s gift of a Sherrin football (which sells for up to $180) pales in comparison to the nine-foot board, which had to be transported in the wee hours to Parliament House.

“We left at 4.30am and drove down there and then when we got to parliament we went to the underground car park, through a security door and then straight up through the middle of parliament so no one could see the board,” said Tom Wentworth, who oversaw the board’s production.

“We put it up in the PM’s tea room and then Tony came in. We had a few photos and had a laugh about surfing.”