The number of Australians born overseas has hit its highest level in more than a century, new figures from the ABS reveal.

Australia is regarded as a multicultural nation, and here are the figures to prove it.

The proportion of Australian residents born overseas has soared to its highest level in more than 120 years, new figures migration data released by the Australian Bureau of Statistics (ABS) reveals.

In 2015, more than 28 per cent of the population were born overseas, the largest proportion since 1895, according to the research released on Wednesday. The percentage has increased every year for the past 15 years.

“Australia has traditionally had a high proportion of migrants, but we’ve now hit a peak not seen since the late 1800s,” the ABS’s Beidar Cho said.

The table below, supplied by the ABS, reveals the top 10 nations of birth for residents not born in Australia. 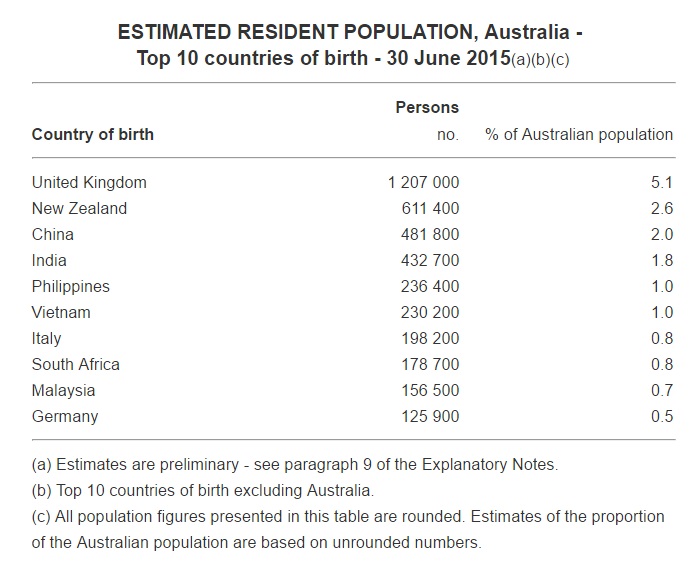 Though the UK, at 5.2% of Australia’s population, still retains top spot by some margin, it’s clear that mantle is likely to be challenged in the years ahead by the likes of New Zealand, China and India.

About 2 per cent of Australia’s population, or 481,000 people, were born in China and there was a big growth in the number of Australia residents born in India, Ms Cho said.

As a proportion of Australia’s total population, the percentage born in the UK has fallen steadily over the past decade while the proportion from New Zealand, China and India has steadily grown.

As for where new arrivals tend to settle upon arrival in Australia, it’s clear that most continue to head to the most populous states within Australia, New South Wales and Victoria.

Nepalese-born Australians were the fastest-growing overseas-born community. Their numbers have swelled more than 11-fold over the past 10 years, from just over 3800 people in 2005 to more than 43,500 in 2015.

Although their population is small compared to other overseas-born groups, the rate of increase – nearly 28 percent a year, on average –  is well above other groups. For example, the next fastest growing groups – those born in Pakistan,  Brazil and India – increased their numbers by around three-fold over the same period.

The steepest decline among the top 50 countries of birth was for Serbian-born Australians, followed by those born in Poland.