My identity empowers me to serve my country

Different – that is the common word heard when one speaks about a Muslim woman living in Australia. Conservative– 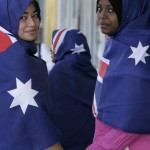 another term used often when referring to their chosen lifestyle. Admirable– when reference made to their dedication towards their faith and principles.

Advance Australia Fair – the last lines of the national anthem echo in the hearts of thousands of Australian Muslim women, yet, when they speak about their loyalty and patriotism towards Australia their sincerity is questioned.

The majority of people would disagree and state that we do not discriminate and carry stereotypes. Australia has progressed as a nation where people of all walks of life are welcomed, diversity is appreciated and harmony day celebrated each year.

Australian Muslim women are not different to any other women living in Australia. Their parallel identity does not overlap but hearing the voice of a school-girl with a head-scarf playing in her school yard to a woman with a Hijab walking into her workplace, they do carry a constant fear of being targeted if ever any issue about Islam or Muslims is spoken about in the media.

The Australian Federal government has enough laws and legislations in place which give equal rights to all people irrespective of their background, religion or ethnicity. Young and old Muslim women are found in all walks of life and are successful role models for younger generation Australians.

I decided to embark on a journey, to travel across the inner suburbs of western Sydney to far rural areas of New South Wales to meet Australian Muslim women. My first stop was at home meeting my close Pakistani-Australian Muslim female friends. They share common goals, interests and spoke about their childhood. It was interesting to see that these professional educated women all said that at times they were in constant search of approval.

Approval. That word left a few unanswered questions. Was it approval of their culture and religion or both?  According to prominent Muslim organisations, the 2011 census states the number of Muslims in Australia is as high as 476, 300 and comprising of people from more than 70 different countries.

It has been noticed; time and again the general public in certain areas only perceive Australian Muslims as though they only belong to an Arab, Lebanese and Turkish background. However, a significant percentage of Australian Muslims belong to Pakistan, India, Bangladesh, Malaysia, Iran, Indonesia, Afghanistan and many African States.

All Australian citizens, no matter what religion, race or culture they belong to must be loyal to their country. Assimilation does not necessarily mean that they should automatically delve in to the mainstream culture or environment that surrounds them. One cannot blame an individual or brand a particular community for not following the correct code of culture in Australia, as there is no specific culture yet developed. However, the Universal code of Tolerance, Respect, Loyalty, Patriotism and Freedom are all a part of the Australian identity.

Today, where the world has become a global village, language, culture and tradition are less important to the people than their mutual economical and political interests. We do not need to seek approval yet we seek endorsement for carrying the correct culture or religion according to mainstream society.

Let’s come back to my journey and interaction with Australian Muslim women. I met a Lebanese Australian Muslim women, a lawyer by profession and mother of three children. Despite being a third generation Australian she says at times your identity is questioned but no matter what race you belong to every Australian Muslim woman has a distinctive quality that ties them all together. She says the status of women in the sight of Allah (God), has given us a special place even more than that given to men. As a Muslim woman she says she is empowered by qualities that allow her to spread compassion, educate and seek justice towards all.

I met a newly migrated Bangladeshi women, 23 years old nurse, and working in a rural town in outback New South Wales. When she arrived to Australia she said she knew she would be accepted immediately by the people. However, at times she says she when I applied to work in this rural town I was indirectly asked at times whether my being a Muslim woman would affect my job role.

A lot of stories can be told. Many experiences can be shared with the same sentiment. Most Australian women, in general, can relate to the feelings of their fellow Australian Muslim women being a Woman that have ever had to face criticism.

We see Australian Muslim women wherever we go across Australia. Some are identified as they wear Hijabs and some that do not are not recognised easily. However, we see them serving at the local doctor’s clinic or checkout counters at the supermarket stores. We may see an Australian Muslim woman teaching one of our children at a local school.

We saw the first Pakistani-Australian Muslim woman entering Australian parliament this year. The first Hijabi woman was seen scoring a try at a local rugby tournament. It was not long ago when the Burqini was introduced to Australian beaches.

Next time when you see these Australian Muslim women remember that they share the same thought and that their identity does not set them apart but empowers them to serve their country – their home Australia. (The article has also been printed by Rabitah International).