At least 23 injured and three in “delicate condition,” officials say, as people run into streets in panic. 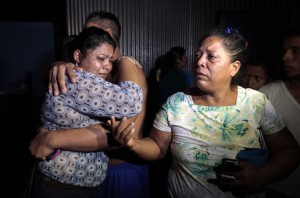 Nicaraguans ran into the streets in panic as a 6.1-magnitude earthquake rattled the Central American country, damaging dozens of houses and knocking out power to some areas.

At least 23 people were injured by falling ceilings, beams and walls in the town of Nagarote, 50km northwest of the capital of Managua on Thursday, said Guillermo Gonzalez, director of the disaster prevention agency.

Gonzalez said that three of the injured were in “delicate condition.” He gave no other details.

Landslides were blocking two highways south of Managua, he added.

The US Geological Survey said the quake struck at 5:27 pm local time (23:27 GMT), and was centered about 18km southeast of the city of Larreynaga. It had a depth of 10km.

Panicked people from different parts of the country called the popular radio station Radio Ya to report feeling a strong shaking and say they had lost electricity and potable water.

Authorities suspended classes on Friday in the cities of Leon and Managua.