JUBA: At least 58 people were killed and more than 100 others wounded in Thursday’s attack on a UN base in South Sudan sheltering thousands of displaced civilians, a UN official said.

“Forty-eight bodies, including children, women, men, have been recovered from inside the base. The bodies of 10 attackers have been found outside the base, the top UN official in the country, Toby Lanzer, told AFP on Friday. 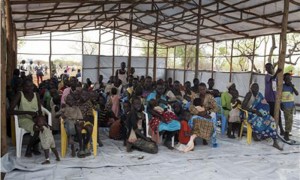 “The total death toll is 58, but that could increase as over 100 people were wounded, some of them very seriously.”In the clearest account yet of the incident in the government-controlled town of Bor,

Lanzer said a group of around 350 armed youths in civilian clothes “used extremely violent force to breach the perimeter” of the UN base.

He said they opened fire on terrified civilians, who have sought shelter with the UN from a wave of ethnic violence that has marked the four-month-old conflict, with the apparent aim of killing as many people as possible.

“When we realised we were under attack we responded… the quick actions of the peacekeepers saved lives,” Lanzer said.

He praised the actions of UN peacekeepers from India, Nepal and South Korea charged with the protection of the 5,000 people in the UN base.

“We will do everything necessary to protect the lives of people in our protection, including the use of lethal force,” Lanzer said.

He said measures had been taken to boost security at other UN bases in the country, which are sheltering close to 60,000 people from different ethnic groups.

“This past week has been the most bleak in South Sudan’s history,” Lanzer said, citing the attack on the UN base as well as reports of renewed atrocities further north in the oil-hub of Bentiu, which fell to rebel forces during the week.

“It’s vital that all communities realise that they are taking this country nowhere fast,” he said.

More than 67,000 civilians across the country are sheltering inside UN bases for protection from ethnic attacks, with heavy fighting ongoing as the rebels say they are targeting key oil fields.

On Thursday, the army said it was trying to wrest back control of Bentiu from fighters loyal to rebel chief Riek Machar.

“Bentiu is still under the hands of the rebels but we are closing in,” army spokesman Philip Aguer told AFP. “There is still fighting. “Information Minister Makuei insisted all oil fields were under government control, but that production had stalled in Unity — a key oil zone — as facilities were damaged in fighting.

UN peacekeepers reported dozens of corpses littering the streets of Bentiu, the state capital of Unity, which rebels had previously seized in December at the beginning of the conflict.

The fighting is between soldiers loyal to President Salva Kiir and mutinous troops who have sided with his former vice president Machar, whom Kiir sacked in 2013.

The conflict has taken on an ethnic dimension, pitting Kiir’s Dinka tribe against militia forces from Machar’s Nuer.

Ban has warned that more than one million people are at risk of famine in the troubled country.

More than 3.7 million people are in dire need of food aid, many of them being forced to eat “famine foods” such as grasses and leaves, UN children’s agency UNICEF said Thursday.