KARACHI: On the directive of government, Armed forces has decided to launch formal operation against militants in North Waziristan named ‘Zarb-e-Azb’, following are the statements of different political leaders, 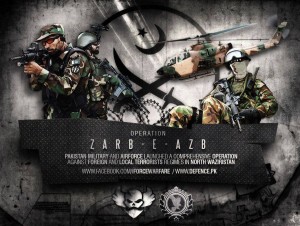 Minister for Information and Broadcasting Pervaiz Rasheed has made appeal to all political parties of the country to support Pakistan Army in the operation.

According to a statement issued on Sunday, Pervaiz Rasheed said terrorists will now be eliminated with full force for which we need express true unity and solidarity with Pakistan Army.

The Minister said government adopted the path of dialogue but terrorists continued attacks even the during the talks and governments’ efforts to solve issue with negotiation ended in vain.

Governor of Sindh Dr. Ishratul Ibad said nation stands by Pakistan Army over the operation against militants to eliminate terrorism from the country and to attain peace.

Sindh Information Minister Sherjeel Memon said abolition of terrorists from the country has become inevitable. He said prayer of whole nation is with Army who will get success in the mission.

Former interior minister and leader of Pakistan Peoples’ Party (PPP)Rehman Malik said government adopted every possible way to establish peace through talks but remained unsuccessful. He said Afghanistan should be taken in confidence before the launch of operation as they (militants) will run to Afghanistan for refugee.

Rustam Shah Mohmand, a member of the government appointed negotiation committee said operation should be started after consultation of local residents.

Meanwhile, member Taliban negotiating committee,Professor Ibrahim said it seems that government didn’t advised for operation rather its started by Army itself.

At the other end Chief of Army Staff General Raheel Sharif said the military operation in North Waziristan Agency (NWA) was launched to eliminate criminals from the area,

Delivering an address in the National Defence University Islamabad, the COAS said the operation was mainly started to root out all militants from the [restive] region.

“We will rid the country of terrorists,” he added.

The COAS said dens of terrorists in NWA would be destroyed to get rid of the menace of terrorism.

The military formally launched the operation ‘Zarb-e-Azb’ in NWA to crush militants, involved in spreading terrorism and carrying out terror activities in the country.

At least 140 militants had been killed in air strikes by Pakistan Air Force jet fighters since yesterday. Those killed include Uzbek terrorists along with some local and foreign militants.