At least 21 people were killed in an air strike near the Syrian city of Aleppo Thursday. (AFP) 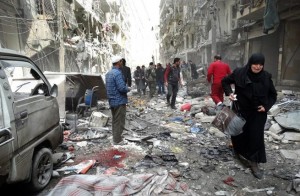 “The number of people killed in an air strike this morning against the market area of Atareb village has risen to 21, including three children,” said the Syrian Observatory for Human Rights.

“The area that was struck today is a market area, that’s why there were so many civilians killed,” said Aleppo-based activist Abu Omar.

The regime has launched almost daily air strikes on the largely rebel-held Aleppo since mid-December last year, killing hundreds and forcing thousands to leave their homes.

More than 150,000 people have been killed in Syria’s three-year war, and more than half of Syria’s population has been forced to leave their homes.