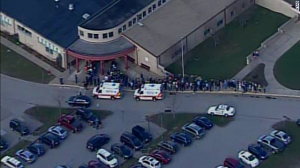 The suspect in today’s stabbings at a Pittsburgh-area high school is being treated for injuries to his hands, Murrysville Police Chief Thomas Seefeld said. An adult security guard is among the injured, he said.

At least 20 students at Franklin Regional Senior High School were injured, and the alleged attacker is in custody, said Dan Stevens, a spokesman for Westmoreland County Emergency Management.

The violence, Stevens said, happened in classrooms and a hallway. Four people were flown to hospitals by helicopter, he said.

Seven teens and one adult were being treated at nearby Forbes Regional Hospital in Monroeville, Pennsylvania, according to Dr. Chris Kaufmann. Their injuries are “quite serious,” and “some are clearly life threatening,” he said.

Victims were stabbed in their torso, abdomen, chest and back areas, and two people were sent to surgery immediately after arriving, he said. Those two patients had low blood pressure, he said. A third was being prepared for surgery Wednesday morning, and the rest were being evaluated to see whether surgery was necessary, he said.

Eleven victims were taken to four University of Pittsburgh Medical Center hospitals, UPMC spokesman Cindy McGrath said. One was sent to UPMC Presbyterian; four were taken to Children’s Hospital; one was taken to UPMC Mercy; and five were taken to UPMC East. She did not have ages or conditions of the victims.

The students who were hurt range in age from 14 to 17, Stevens said. All of the injures are stabbing-related, such as lacerations or punctures, and there were no guns involved he, said.

A message on the Franklin Regional School District’s website said all of its elementary schools were closed after the incident, and “the middle school and high school students are secure.”

The school is in Murrysville, about 15 miles east of downtown Pittsburgh. Information on what led to the stabbings and the conditions of the injured are still unfolding.

Later Wednesday morning, students were being released to their parents, Stevens said. Shortly before 10 a.m. ET,  KDKA reported that some parents were beginning to be reunited with their children.

Bill Rehkopf, a KDKA radio host and Franklin Regional High School graduate, reported on air that he was shocked by the stabbings.

He said he was seeing parents showing up at the school and an increasing media presence. Parents appear to be calm, he said. Another KDKA reporter said she spoke with a parent who said she received a cell phone call from her daughter, who told her mother that “something bad” happened and that she needed to be picked up.

A media briefing was scheduled for 10:30 a.m. ET at Forbes Regional Hospital.