Sydney, Feb 28, 2013; A Turkish-language newspaper published in Sydney was named Best Print Publication of the Year at the inaugural Premier’s Multicultural Media Awards in Sydney tonight. 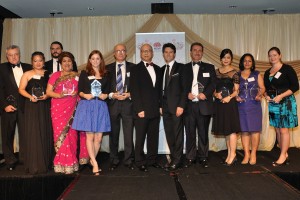 Zaman, one of seven Turkish-language papers published in Sydney, is an Australian edition of Zaman International, a leading daily newspaper in Istanbul.

The Indian Link fortnightly publication and the Filipino monthly Ang Kalatas were finalists.

Awards were announced in 10 categories across print, radio and online news media.

Addressing the Awards’ presentation dinner, Premier Barry O’Farrell, said: “Great democracies live or die on the strength of their news media. In this state we have a mountain of community media in every format and in many languages, to supplement the work of the daily mainstream news providers.

“It is not surprising that our democracy is the envy of many around the world. No person in NSW needs to be uninformed or ill-informed about politics, health, legal issues or entertainment due to a lack of English.

“The NSW Government wanted to recognise excellence in journalism in our non-English and multicultural community news outlets and to encourage its ongoing on-going development.

“Tonight we have seen some of their fantastic work on show,” Mr O’Farrell said.

Minister for Citizenship and Communities Victor Dominello said more than 120 entries were received for these awards.

“The number and outstanding standard of the entries is testament to the commitment and enthusiasm of the multicultural media sector,” Mr Dominello said.

“The awards also assist mainstream media and the broader NSW community to recognise multicultural media as a powerful resource in our community.

“Tonight’s event is the start of a new and exciting annual initiative that will continue to honour and recognise the work of the multicultural media for years to come.”

Two dramatic stories produced by the Hindi Language Program on SBS Radio scooped were joint winners in the Best Radio Report of the Year award.

A story about the drowning death of two Punjabis during a picnic at Byron Bay warned of the danger for new migrants and visitors to Australia entering the ocean without swimming experience.

The second item dealt with allegations of forced religious conversions and marriages of young women in Pakistan. The award went to the program’s executive producer Ms Kumud Merani.

The Best Commentary of the Year went to writer Hani El Turk of the Arabic Daily Newspaper El Telegraph for an article outlining police warnings about the illegal practice of female circumcision or genital mutilation in NSW, explaining that there was nothing in Islamic law that allows such practices.

The Awards were conducted by the Community Relations Commission of NSW and judged by an independent panel of academic and working media experts. Further details of the winners are as follows:

Best Radio Report of the Year

Summary:  A survivor vividly tells how his two Punjabi friends living in Brisbane drowned while swimming in Byron Bay during a carefree picnic, throwing light on the ocean’s dangers for many new migrants or visitors and giving beach safety tips.

Summary:  Amid allegations of Hindu girls in Pakistan’s Sind province being kidnapped, forcibly converted to Islam and married off against their will, the program focuses on the case of 19-year-old Rinkle Kumari. Interviews place her story in the wider context of women’s rights and political corruption.

Best News Report of the Year

Summary:  An ambitious four-part report on the first India-Australia Literature Forum in western Sydney. Writers of Indian and Aboriginal heritage reflect on their shared experiences, drawing parallels between struggles of Dalit and Aboriginal writers to make their voices heard.

Best Editorial/Commentary of the Year

Summary:  Writer Hani El Turk outlines police warnings about the illegal practice of female circumcision or genital mutilation in New South Wales, explaining that there is nothing in Islamic law that allows such practices. He details the health and psychological consequences of such surgery and exposes the dangers.

Best Print Publication of the Year

Summary:  Zaman International Newspaper, the parent company of Zaman Australia, has been the only Turkish newspaper to win gold medals for five consecutive years from the American-based Society for News Design. Eye-catching layouts, good use of colour and photographs makes Zaman stand out from the competition.

Best Use of Online & Digital Media

Summary:  Since its launch in 2010, Ang Kalatas (The Message) monthly newspaper has engaged its Filipino readers in Australia with news and features across digital platforms. The website features live streaming of national events, together with stories designed to engage and interest its target audience.

Best Online Publication of the Year

Best Image of the Year

Summary:  This image by amateur photographer Mala Mehta was featured in a story on Sydney primary school children who learned about Indian culture through celebrating festivals, learning Hindi and songs and dances through a Department of Education and Training program called India Calling.

Best Article on Multiculturalism of the Year

Summary:  Has multiculturalism failed? A special three-part joint report looks at the differing experiences of ethnic Turks in Germany and Australia, comparing the way they integrate. Two generations of Turks born in Germany were not given German citizenship, unlike in Australia.

Best Feature of the Year

Joint winner:  Write About Me
Awarded to:  Naomi Tsvirko

Summary:  The writer’s grandmother lost her heart in Lebanon when her husband was bashed to death during the Lebanese civil war. Reflecting on her life, Naomi Tsvirko tells her personal story of love and loss in a small village, outlining her heroism when she saved hundreds in her village from militia.

Summary:  Behind the Riot examines the triggers for Sydney’s Muslim riots in September 2012, talking to Islamic leaders from various factions who united in their condemnation of violent behaviour and appealed for peace as a platform to unite the community in supporting law and order.

Best Investigative Story of the Year

Summary:  An interview with Somali migrant Faduma Salah Musse, who explains what it’s like to be a woman who has experienced female genital mutilation. Many women in Australia’s African communities have undergone the surgery and Faduma explains how she was forced to have her daughters do the same.

Lifetime Contribution of the Year

One of the joint founders in 1986 (with Eddie Obeid) of the charitable Australian Lebanese Christian Federation, dedicated to helping Arabic-speaking community members to integrate and access Australian services such as health, local government, education and housing.

An Nahar has been bringing news to the Lebanese and Arabic-speaking communities since 1978. Based in Bankstown, the twice-weekly newspaper focuses on news from Arab nations and covers Australian current affairs, community news and sports.

Anwar Harb is well respected for his charitable causes, including work to help the needy by the Maronite Sisters of the Holy Family. A staunch Lebanese with great loyalty to both Lebanon and Australia, Mr Harb is also a property developer and is a consultant to the World Lebanese Cultural Union.

Simon Ko had a long and distinguished career in broadcasting, advertising, media, and executive management even before he arrived in Australia in 1998.

Having studied in the United States, Mr Ko began his career at a Hong Kong television station before moving into advertising with the Hong Kong metro transport company.

His service to Sing Tao Daily started in 1980, when he joined the Hong Kong head office as executive director. His job encompassed such non-media sectors as retail developments, film companies and hotels. Joining the Sing Tao Daily in Sydney, he oversaw the newspaper’s transformation into the largest Chinese-language newspaper in Australia.

Mr Ko and his newspaper have been big contributors to charity work in Australian communities and overseas, particularly to disaster relief through the Red Cross.