BANGUI: Heavily armed African and French peacekeepers escorted some of the last remaining Muslims out of Central African Republic’s volatile capital on Sunday, trucking more than 1,300 people who for months had been trapped in their neighbourhood by violent Christian militants. 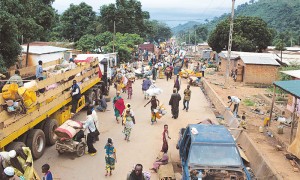 Within minutes of the convoy’s departure, an angry swarm of neighbours descended upon the mosque in a scene of total anarchy. Tools in hand, they swiftly dismantled and stole the loudspeaker once used for the call to prayer and soon stripped the house of worship of even its ceiling fan blades.

One man quickly scrawled “Youth Centre” in black marker across the front of the mosque. Others mockingly swept the dirt from the ground in front of the building with brooms and shouted “We have cleaned Central African Republic of the Muslims!” “We didn’t want the Muslims here and we don’t want their mosque here anymore either,” said Guy Richard, 36, who loads baggage onto trucks for a living, as he and his friends made off with pieces of the mosque.

Armed Congolese peacekeepers stood watch but did not fire into the air or attempt to stop the looting.

Soon teams of thieves were stripping the metal roofs of nearby abandoned Muslim businesses in the PK12 neighborhood of Bangui. “Pillage! Pillage!” children cried as they helped cart away wood and metal.

“The Central Africans have gone crazy, pillaging a holy place,” said Congolese peacekeeper Staff Sgt. Pety-Pety, who refused to give his first name, as the mosque came under attack from militants known as anti-Balaka in their trademark wigs and hats with animal horns. Sunday’s exodus further partitions the country, a process that has been under way since January, when a Muslim rebel government gave up power nearly a year after overthrowing the president of a decade.

The United Nations has described the forced displacement of tens of thousands of Muslims as “ethnic cleansing.”

While previous groups have been taken to neighbouring Chad, Sunday’s convoys were headed to two towns in the north on the Central African Republic side of the border.

The long-chaotic country’s political crisis has prompted fears of genocide since it first intensified in December when Christian militants stormed the capital in an attempt to overthrow the Muslim rebel government.

They soon began attacking Muslim civilians accused of having collaborated with the much despised rebels.

The rebel leader-turned-president ultimately resigned, and mob killings of Muslims and mutilation of their bodies took place on a near-daily basis in Bangui earlier this year. Tens of thousands of Muslims were escorted to safety in neighbouring Chad, though earlier convoys were fraught with violence.

Militants lined the streets and attacked departing trucks, at one point beating a man to death after he fell from his vehicle.

In an effort to avoid chaos, Sunday’s convoy had been scheduled to depart at dawn, not long after men prayed in the mosque for the last time and lightning flickered in the dark sky. It took hours, though, for the families to load up their wares, from plastic jugs for water to bicycles, and even satellite dishes and chairs.

In starting a new life in an unknown city, many said they were bringing anything of value that they could take could be sold there to make money.

Tonga Djobo, 75, in a long flowing gown, prayer cap and orthopedic shoes, steadied himself with a stick he used to prod cattle that also doubled as a cane.

He said he first came to Central African Republic 47 years ago from neighboring Chad.Today would be the last day of his life he would spend in Bangui, he declared, joyously pumping his fists in the air. Meanwhile, his wife and family carted their wares all wrapped in bright wax-print fabrics to their assigned truck and waited to board.—AP